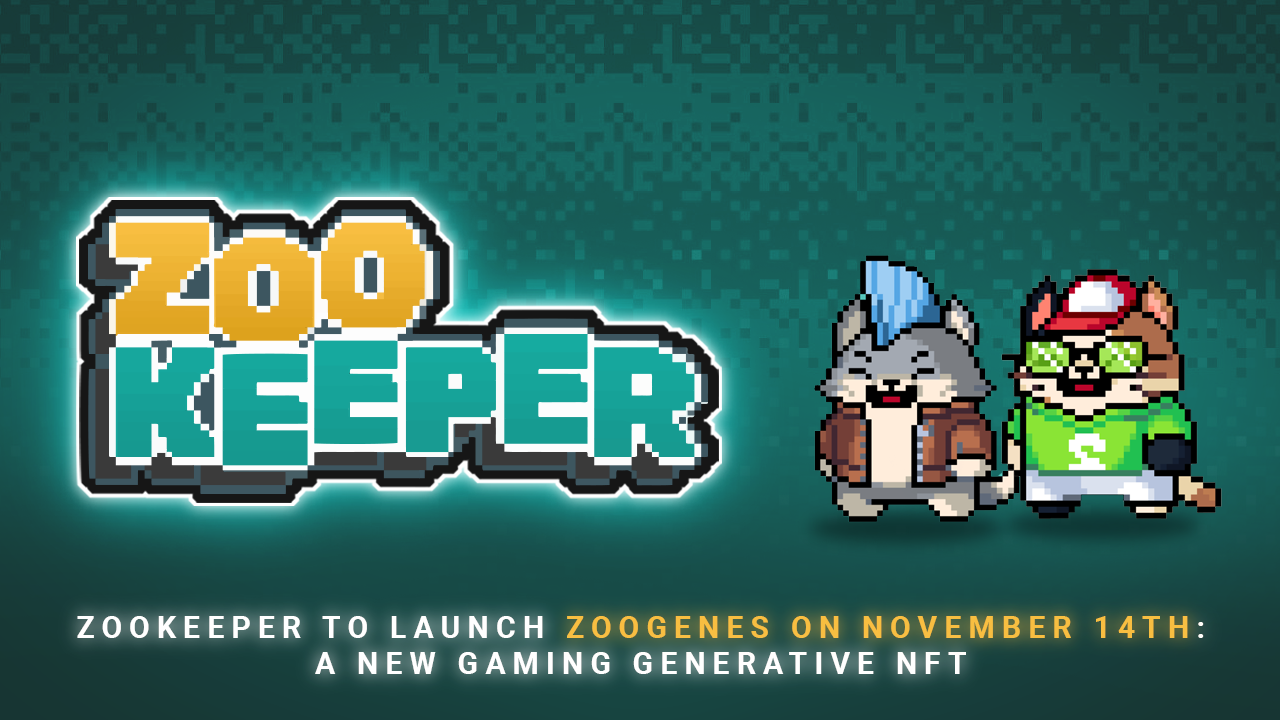 12th November 2021, GENEVA, Switzerland — ZooKeeper will launch the first generation of ZooGenes On the 14th of November, with 10,000 unique NFT characters to be distributed over 3 rounds. Those who previously held ZOO tokens in their wallets received an Yggdrazil Keepsake and will be given priority during the first 6 hours of the first sales round.

ZooGenes are ZooKeeper’s gaming-oriented randomly generated NFTs with billions of possible variations. A 3D version of these playable (and tradable) characters can be used in future upcoming ZooKeeper games. Every character will have unique visual characteristics and individual abilities, (Strength, Agility…) with correlated stats that will be applied to every future ZooKeeper game.

How many different ZooGenes can there really be? Well, to start off there are 30 different animals, each with varying facial expressions, different names, costumes, accessories, special backgrounds, and effects; all of which have different rarity levels. All these different designs result in an amazing 21.8 billion possible variations.

And to make them even more unique, each ZooGenes ability will adapt to all upcoming ZooKeeper games. Each pixel art ZooGenes animal will have its generated 3D counterpart playable in ZooKeeper games such as ZooRacers, developed by ZooKeeper’s partner, Yggdrazil.

ZooGenes abilities are randomly generated and split into 3 distinct categories (Power, Mind, and Special) with a maximum of 15 abilities available for each ZooGenes. A full set of points will be attributed and distributed among all abilities, each with corresponding rarity classes (N, R, SR, SSR, or UR). The ability subcategories include:

As well as being tradable, playable characters, ZooGenes can be bought by anyone with a WAN-filled wallet. Holders just need to click the purchase button, and enter the queue to mint their very first unique ZooGenes. ZooGenes are only available for purchase with WAN to reduce friction & make the process more universal. Eventually, ZooGenes will also be tradable on OpenZoo.io.

The 1st round of 4,000 ZooGenes is exclusively available during the first 6 hours of launch to those who own the YGGDRAZIL Keepsakes. The Keepsakes have already been airdropped to all ZOO token holders.

ZooRacers is the upcoming multi-platform arcade game from ZooKeeper & Yggdrazil, the play-and-earn racing game mixes fun and skills in a challenging multi-chain environment with playable NFT characters. The drivers all have unique visual characteristics, abilities, and stats which can be applied to every future ZooKeeper game.

ZooRacers will use vZOO, the decentralized cross-chain token, and ZooKeeper will also sponsor all transaction fees on new wallets created for the game (exclusively for Wanchain players). The final release date for the game is expected in Q2 of 2022; a beta version will be available Q1 of 2022. ZooRacers will be Free-to-Play, compatible Play-and-Earn, and will be available on macOS, PC, Android, and iOS.

ZooKeeper.finance is the source of this content. This Press Release is for informational purposes only. The information does not constitute investment advice or an offer to invest.